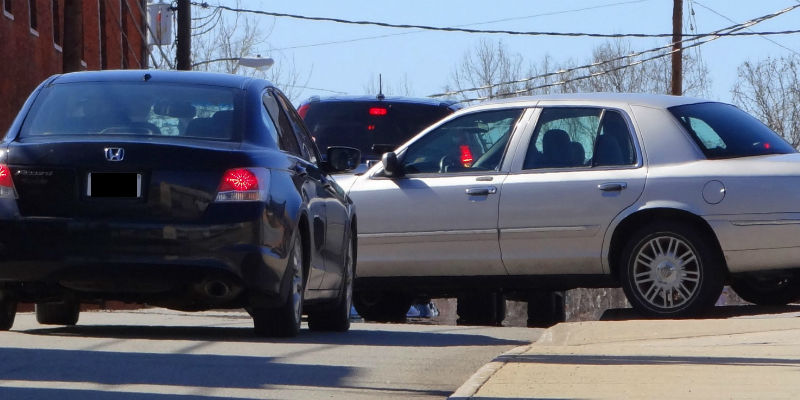 BREAKING NEWS- Corvallis Police are asking drivers to avoid the area around SW 2nd and SW Adams as motorists have become stranded for several days determining exactly who may have the right of way at the intersection. Mediators are now at the scene after a special meeting of Benton County Commissioners was called to study the crisis. County Commissioner Jay Dixon was optimistic the mediators may help to find a solution prior to next Tuesday’s work session to appoint a committee to work out a study for mitigating the mishap.

Liz Reardon, a motorists that has been at the scene for two days, said, “This is where 2nd goes from one-way to two ways, so it appears the confusion started with who should turn east onto Adams first.” Len Algood saw it differently, stating, “I am actually the first car in line heading south on 2nd, and while I don’t have a stop sign, it feels like I should, and the women heading toward 3rd on Adams, does have the nose of her car sticking out onto to 2nd, so she’s probably been waiting longer than I have.”

The car Algood refers to is a late model blue Prius with a ‘Buy Local’ decal on its right rear bumper, but at press time, the driver could not be located. Reports, though uncorroborated, consistently point to her leaving the scene for a few minutes to obtain a bottle of kombucha. The Walmart emergency response shipment contained only water in plastic bottles, and inorganic food products that did not appear to be locally sourced.

Mayor Traber committed to the crowd that the City would look into the Walmart shipment, saying, “The current circumstances are exceedingly stressful, one would hope that donors would be sensitive to the needs of the victims.”

Apparently, the trouble started as the Wednesday Farmers’ Market was winding down and motorist started departing the area. A spokesman for the market said, “There are a number of downtown happenings every day, so the exact cause of the present crisis cannot be known with any certainty, it’s just that there is this perception that our customer base is abnormally polite, and possibly submissive in traffic situations.”

Corvallis Police Chief Jon Sassaman advised that there are at least 5 cars stranded in each direction of the intersection, he declined to comment on who may be responsible for the situation, saying, “This is not a time to assign blame, everyone seems to want to do the right thing, but it may take some time for a consensus to arise about what that might be.” Sassaman also commented he’d seen this sort of thing before and spoke reassuringly of his expectation that the mediators may prove to be key in resolving the matter.