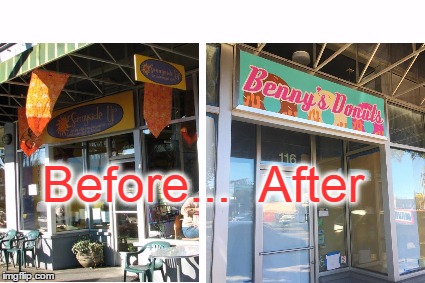 Fried dough enthusiasts got all hard in the arteries with excitement last week over news that a Benny’s Donuts would occupy the barely cold body of the now deceased Sunnyside-Up location in downtown Corvallis. Dr. Wayne Tarpin said he’s really looking forward to all the new heart disease cases the place should offer.

Police Chief Jon Sassaman was jubilant, stating, “Our current officers are enthusiastic, and this new place will make hiring so much easier.” However, not everyone is happy, Mayor Biff Traber is anticipating sharp speeding ticket revenue declines .

Echoing Traber’s concerns, Wesley Pillthrow of Oregon State University’s Monsanto School of Culinary Anthropology said, “It is well accepted common knowledge among researchers that police officers are uniquely predisposed to becoming addicted  to fried dough, this sets up a craving and satiation cycle that makes laying in wait for speeders very difficult for the average law enforcement professional.” Pillthrow went on to state he has seen whole families destroyed as an officer’s addiction takes over.

Taco Bell staffers report being generally relieved, releasing a joint statement saying, “Ever since the marijuana dispensaries have opened, we have been running far past capacity, we are grateful that some segment of our current demand will now move to this new provider of salt and fat.” Taco Bell staff declined to state if the reduced load may result in higher likelihoods of accurately fulfilled orders.