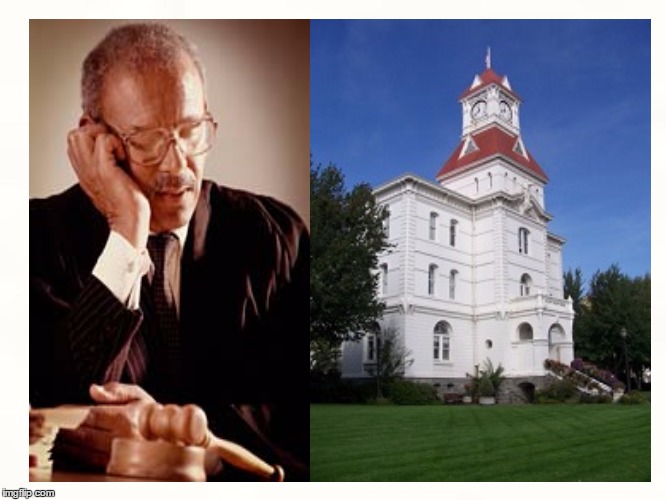 When the framers of our constitution envisioned a jury of one’s peers, the heartless bastards clearly gave not one fuck about disturbing the lives of jurors, and we’ve all been making up bullshit excuses since. But, Benton County residents have a built in exemption most other communities don’t have, a courthouse that engineering studies have shown to be an absolute deathtrap should a quake occur.

It all started many years ago when some do-gooders thought the county should commission an engineering firm to study what would happen to our vintage 1889 courthouse in the event of an earthquake. Everyone agrees we’re overdue for huge damn quake, so much so that a whole white paper industrial complex has sprung up over the damn thing, and that OPB has committed to doing a daily story about it until the quake comes.

Anyhoo, the study showed courthouse occupants would, in the main, die excruciating deaths in the event of the big one, but that it would cost too damn much to retrofit the pretty little building for earthquake safety, so everyone started talking about a new jail instead. Now, fast forward about a decade and the county commissions a new study and finds out the courthouse has not grown retrofits all on its own, and the price tag for a fix has grown even higher.

Now, this all may seem like bad news, but according to longtime Corvallis attorney Jack Meihoff, this is where prospective jurors can get a little satisfaction. He suggests the following steps:

1) When you receive your jury summons, make an appointment with one of those Marriage and Family counselors that change their office addresses a lot. They aren’t shady, just desperate.

2) What you need is a note from a mental health expert that you are suffering from anxiety about doing jury duty in a deathtrap, so let your Marriage and Family counselor know you’ll expect that note. You can probably negotiate the fee with your counselor.

3) Send the jury summons back with the note. Judges have law degrees, and for some reason lawyering types are enamored and intimidated by mental health workers, so that should do it.

Lastly, Meihoff suggests you not feel bad about skipping on this civil duty, stating, “Look, at some point we’ll probably move all our criminal justice operations over to Albany, after all, moving our homeless and affordable housing there has worked out nicely.”