п»ї HP Says Screw You, But With Fireworks – The Laughing Loafer
Skip to content 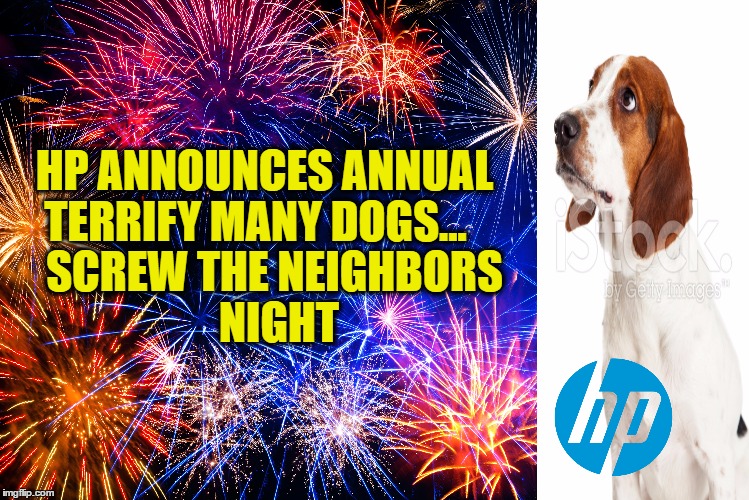 Has-been tech company, Hewlett-Packard announced this week their annual community fireworks display would take place the evening of Saturday, July 23 on their Corvallis campus – and by community, what the official memo says is, and this is what it actually says, “For your comfort and safety, we ask all residents to refrain from entering the HP site during this time.”

So by community, what is really meant is, “We’re bigger than you, so fuck your damn peace and quiet, and to hell with your little toy residential community neighborhoods and its dirty little babies and doggies cowering at the explosions we’ll be setting off.” Okay, we made that last part up, as well as HP using the word ‘community’ at all. Why did we make all that up, because it’s still accurate.

We contacted Hewlett-Packard to ask if they understood the affect they may be having on area pets, but then we actually read the memo that actually says, and this is truly what it does say, “….and keep your pets indoors during the fireworks show.”

The memo itself was hand delivered to area residents, our staffer finding theirs semi-rolled up between a front patio wall and a huge potted plant, kind of like it was meant to be missed. The memo itself is graphically sleek, employing a compelling mix of font proportions and white space manipulations reminiscent of a late 1990’s sales literature vernacular designed to impart that the seller is better than you, and that your questions are probably stupid.